The Most Famous Guitars of All Time The Most Famous Guitars of All Time

It's International Guitar Month, so what better way to celebrate it than spotlighting the ultimate list of famous guitars (unranked, because they all play an important role in the history of the instrument). No matter where you live or what language you speak, at least one of these beauties will undoubtedly mean something to you!

Most Famous Guitars of All Time

There are few more famous guitars in all guitardom than Billy Gibbons’ 1959 Les Paul, known to guitar aficionados worldwide as Pearly Gates. The ZZ Top guitarist acquired the instrument in 1968, just as the band were starting to make a name for themselves in Texas.

Pearly Gates has played a starring role on every one of the band’s records from ZZ Top’s First Album in 1971 to the present. So, how did big, bad Billy G. get his hands on this little slice of heaven?

“There was a rancher outside of Houston, TX who played in a country band but turned his attention towards wrangling cattle,” explained Gibbons. “It was rumored he had the guitar under one of his beds in his ranch house and wanted to sell it.” Without wasting a minute of time, the guitarist drove until he found the elusive rancher. “I had $250 in my pocket, and when he pulled out that ‘59 Burst, the deal went down,” he said.

If Eddie Van Halen’s family ever decides to auction off his original Frankenstein guitar, the famous guitar would easily sell well in the excess of a million dollars. Not bad for an instrument that Ed originally pieced together in 1976 from about $200 worth of spare parts.

Van Halen installed only one pickup and a single volume control in his famous Frankenstein because he couldn’t remember the wiring circuit for installing additional pickups and tone controls. “I never touched the tone controls anyway,” said Van Halen, “and I could never get both the neck and bridge pickups to sound right through an amp, so I just put in the rear one.” He also installed jumbo Gibson frets and a brass nut, mounted Schaller mini tuners, and salvaged a vibrato tailpiece from one of his vintage Stratocaster guitars (it was later replaced by a locking Floyd Rose system).

Brian May designed and built his famous Red Special guitar when he was a teenager, and it has been his main guitar ever since. He played it on every Queen album and tour as well as on numerous side projects and solo albums.

May and his dad began work on the Red Special in 1962 and took two years to complete it. “I was 17 when it was finished,” he said. “I knew I wanted a guitar that would sing and have warmth as well as a nice articulating edge. We tried to design a solidbody guitar that had all the advantages of a hollowbody—the ability to feedback in just the right way.”

The Red Special is a masterpiece of inventive domestic craftsmanship. A motorcycle kickstand provided the spring in the vibrato tailpiece, while the oak body came from a 500-year-old fireplace mantel.

“I bought my Gibson SG in a music store in Birmingham, England back in 1967,” said Black Sabbath’s Tony Iommi of this world famous guitar. “I was told it was a ‘64, but I’ve never verified that. Originally it was my backup guitar—my primary guitar was a Fender Stratocaster. While I was recording the first track on our first album, the Strat’s pickups blew. I couldn’t find anyone to repair it, and we didn’t have replacement parts in those days, so I just trashed it and started using the SG. It was my primary guitar on Black Sabbath, Paranoid and Master of Reality.”

The cherry-colored ax has been retired for many years, though Iommi does pull it out from time to time. “My biggest problem with the instrument is that it has a very weak neck and it goes out of tune if you apply too much pressure to it.”

This 1972 Stratocaster, nicknamed “The Duck,” is easily Yngwie Malmsteen’s most famous guitar. He bought it in the late Seventies, in his native Sweden, from a drummer auditioning for his band. “It’s not my favorite Strat,” the neoclassical shredder said, “but for some reason it’s one of my best-sounding ones. It’s been my main guitar since 1978.”

Like most of Malmsteen’s Strats, the Duck is fitted with DiMarzio HS-3 pickups in the bridge and neck positions, with the original pickup still in the middle. The maple fingerboard was scalloped by Yngwie himself in 1980.

“This is the guitar I was meant to have,” said Jimmy Page of his ‘59 Les Paul Standard. “It became my wife and mistress...without the alimony!” Page acquired his most famous guitar from another legendary guitarist—Joe Walsh of the Eagles and the James Gang.

In the late ‘60s, Joe attended Kent State University in Ohio playing with various bands in the Cleveland area. He had met Page while Jimmy was still in the Yardbirds, and they met up again when the James Gang opened for Led Zeppelin in early 1969. “I always thought Jimmy was a great guy and a great player,” said Walsh. “When I first met him he was still playing his Telecaster, but he told me he was looking for a new guitar with more balls. I happened to own two Les Pauls at the time and I offered to sell him one that I liked a little less! The guitar was quite distinctive because the neck was too fat for my tastes, so I had it sanded down and reshaped by the late Virgil Lay, the legendary luthier and owner of Lay’s Guitar Shop in Akron, Ohio.”

Tiger was Jerry Garcia’s main guitar from 1979 to 1989, and was designed and built by Sonoma County luthier Doug Irwin. The instrument was commissioned by Garcia in 1973 following the delivery of Wolf, his first major Irwin-built guitar. Upon commissioning the instrument, Garcia simply told Irwin to "make it the way he thought was best, and don't hold back."

Throughout the design and construction process, it was nicknamed "the Garcia,” but the final name came from the tiger inlaid on the preamp cover located on the guitar's top, just behind the tailpiece. The body features several layers of wood laminated together face-to-face in a configuration that combined several heavy varieties of wood. Throw in a solid brass binding and you have an unusually heavy instrument, weighing close to 13.5 pounds. After Garcia began using a new Irwin guitar (known as Rosebud) in December 1989, Tiger became his backup guitar. But during the Grateful Dead’s final concert on July 9, 1995, a mechanical problem arose with Rosebud. Tiger was brought out and thus became the last guitar Garcia played in public.

This is the holy grail of Carlos Santana guitars. Carlos purchased it at Prune Music in 1970, shortly after his group’s big breakthrough. It was a replacement for the red Gibson SG he played at Woodstock.

“That SG wouldn’t stay in tune, so I destroyed it,” he said. “At the time, I wanted a new guitar, I had to ask the band, because we were all paying for it. The band didn’t want to get me a new guitar, so I smashed the SG. Then I had to get a new one. This guitar was my main workhorse for at least seven albums. It’s got the tone, the feel. You grab it and it’s ready to go!”

Tom Morello (Rage Against the Machine)
1986 Arm The Homeless guitar

In 1986, Rage Against the Machine guitarist Tom Morello was bouncing between low-paying Hollywood jobs, just trying to save some money for a cool guitar.

"I went to this place in Hollywood that builds guitars,” remembered Tom. “I didn't know anything about woods or any technical stuff. I just checked off all these boxes, and they made me the shittiest guitar in the world—but it's what would ultimately become Arm The Homeless.

"Everything about it was bad: it looked bad, it sounded bad, it was grotesquely overpriced, and over the course of the next two years, I changed literally everything about it except for the piece of wood. I didn't know what else to do—I had spent all of my money.

"Over time, I swapped necks on it maybe four times; pickups came and went maybe a dozen times; the whammy bar—every time I got an idea I brought it to some new guitar shop and had it worked on. Finally, I gave up and said, 'Okay, it's never going to sound like what I hear in my head, so I'm going to stop worrying, and I'm just going to play music.' Just to make it clear: I wasn't happy with where the guitar was at, but I settled. I just learned to take the sounds the guitar had and found ways to make music I like with them."

Final Thoughts: Most Famous Guitars of All Time 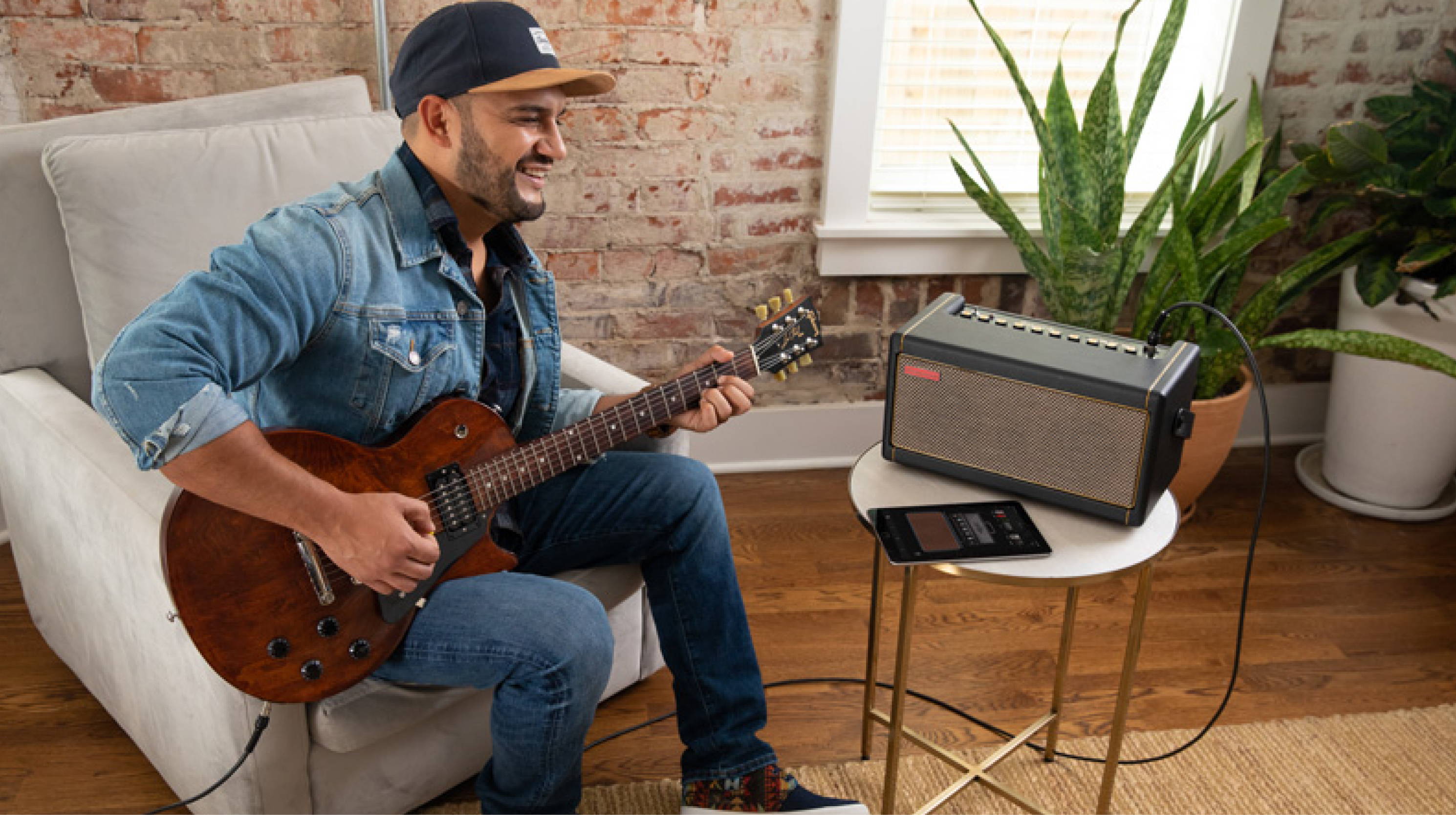 Don't let this list fool you, you'll need more than just a cool guitar to finally nail the elusive guitar sounds of your dreams. Let Positive Grid's Spark be your companion throughout your tone hunting journey. A powerhouse 40 Watt combo, Spark is a smart amp and app that jams along with you using Intelligent Technology, with backing tracks available for any style you play. Including over 10,000 tones (and counting!) on the Positive Grid ToneCloud, you’ll never run out of inspiration. Plus, you can use Spark as your USB audio interface for easy home recording and track your ideas with the included PreSonus Studio One Prime recording software. Find out more here.