Easy Guitar Chords and Songs to Master Them Easy Guitar Chords and Songs to Master Them

Every aspiring guitarist begins their journey on the instrument by first learning a handful of essential, easy guitar chords.

Right from the start, guitarists realize that there are literally hundreds of songs that can be performed with just a few simple guitar chords, and once you’ve got them memorized, you will be on a fast track to learning to play the instrument and mastering dozens of songs. Though these may be considered guitar chords for beginners, guitarists of all levels use them to play every kind of music imaginable.

You may wonder what falls into the category of easy guitar chords. Chords are formed when two or more notes on the guitar are played simultaneously. The combination of different notes played together creates harmony, and the manner in which the notes relate to one another suggests a tonality, which is the reference to a specific key. In a general sense, the key is always either major or minor.

What are the 5 easiest guitar chords I should learn first?

The best easy guitar chords to start with are a group of five chords often referred to as the “CAGED system,” which most guitar teachers consider the essential guitar chords for beginners. These simple guitar chords are referred to in this way because each letter in the word “CAGED” represents the five chords in the system: C, A, G, E and D. Here are these five chords as illustrated in what is commonly known as a chord frame: 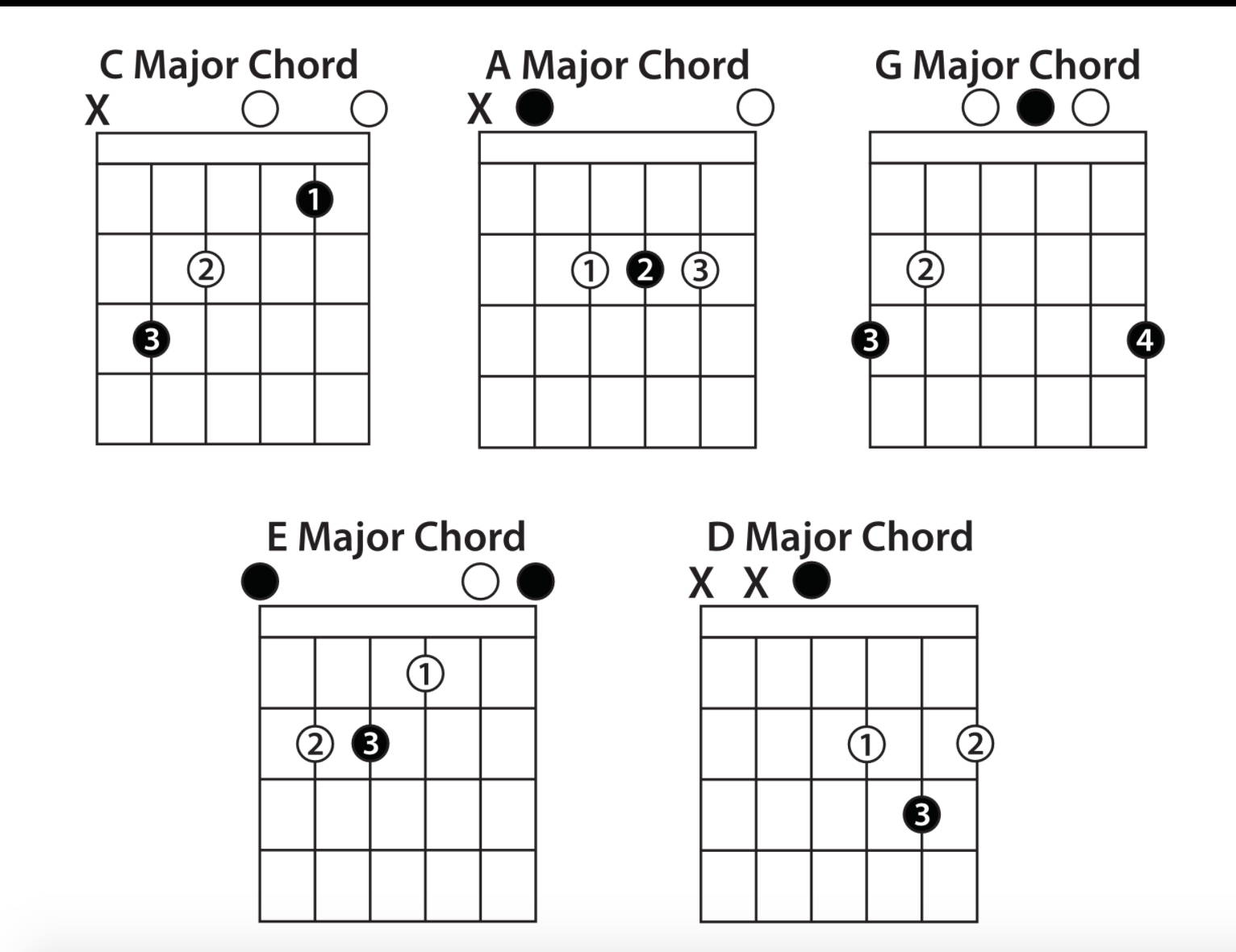 Unfamiliar with how to interpret these chord frames? Here's a quick primer:

1) The diagram represents the guitar’s neck held in a vertical position (with the headstock, where the tuning pegs are, pointed towards the ceiling and the butt of the guitar sitting on the ground).

2) Each chord frame consists of a combination of vertical and horizontal lines. The vertical lines represent the strings, moving from the lowest sounding string (the sixth string) located on the left side of the “box” to the highest sounding string (the first string) located on the right side of the “box.” The horizontal lines represent the nut and the frets: the nut (located at the very beginning of the guitar neck and containing six slots that the strings sit within) is represented by the double lines at the top of the “box,” and, moving downward, each subsequent horizontal line represents the first, second, third, fourth and fifth fret.

The Beatles, “Love Me Do”

“Love Me Do” utilizes the chords G and C during the verse sections of the song. For each chord, first strike the lowest note of the chord—located on either the sixth or fifth string—and then strum the entire chord. During the verse, simply alternate between one bar of G and one bar of C, first striking the lowest note in the chord followed by a full strum. The chorus begins on D, played for two bars, followed by and bar of C and a bar of G.

“Dead Flowers” can be played with just D A and G, which are the chords used during the verse sections. Each chord is strummed fully and is held for the length of a full bar. Begin each chord by striking the lowest note in the chord, and then strum in a “pendulum” style, up and down, in eighth notes (2-an-3-an-4-an) through the remainder of the bar. The chords are in groups of “four,” so the verses consist of D-A-G-D. The first half of the chorus is A-A-D-D; the second half is G-G-D-D and then ends with D-A-G-D.

“Good Riddance” is built from G, C and D during the verse sections. Like “Love Me Do,” strike the lowest note of the chord first and then strum the entire chord. In the same manner as “Dead Flowers,” the chords are in groups of four, in this case G-G-C-D, which is played twice.

“Thinking Out Loud" is built from D, G and A is played in a similar manner, with two bars of D followed by single bars of G and A. The difference with this guitar arrangement is that the chords are sounded in full with each strum on the downbeat of “one” in each bar, followed by a brief muting of the chord on beat two. Muting is a simple technique used to stop the sound of a chord by lightly resting the side of the picking-hand against the strings.

What if I’m struggling to learn easy guitar chords?

Learning to play these guitar chords for beginners will take practice. With each chord, memorize where to place the fretting fingers and, oftentimes, you will discover that it is easier to place the index finger or the middle finger down first, followed by the other fingers. Use a “trial and error” approach until you find the manner that works best and most comfortably for you.

How to write your own songs with easy guitar chords.

Once you have these guitar chords for beginners in your grasp, try playing them in a variety of different and random orders. This very well may inspire you to begin writing guitar riffs of your own. Listen to the chords and try to develop a melody that will link each chord in the sequence together. Not as hard as you thought, right?

Get ready to jam. At home...or even on stage.

Now that you’ve got these essential chord memorized, it’s time to begin jamming with your fellow musician friends, playing along to as many of your favorite songs as possible, playing at parties and get-togethers and—eventually—booking some gigs!

Now you know some easy guitar chords. Where do you go from here?

There are so many great things about learning to play the guitar. First of all, it is very easy to get started with the five essential guitar chords for beginners. Once you’ve got these chords memorized and under your fingers, there are literally thousands of songs you will be able to play. The sky is the limit!

Allow us to introduce you to Spark MINI - our battery-powered practice amp with smart app integration and big, beautiful multi-dimensional sound. With multi-dimensional rich and detailed sound, all-new Smart Jam, video creation, and 8-hours of battery life, it's the biggest smallest rig ever.

Spark MINI also doubles as an ultra-high-quality Bluetooth® speaker, allowing you to stream your favorite music from your computer or mobile device. Sit back and listen, or pick up your guitar and jam along. It's an unmatched, go-anywhere audio sweet spot. Find out more here.